Coloniality of Nature, the Postcolonial City, and Film as Decolonial Dialectic: A review by Ruben Hordijk of the film “One Table Two Elephants”

This review was first published at Antipode Online on April 20, 2020 as open access and re-published here.

Coloniality of Nature, the Postcolonial City, and Film as Decolonial Dialectic

This film is a result of many hands, feet, minds and hearts. (Von Heland and Ernstson 2018)

This 2018 film weaves together several stories surrounding the mountain that in Khoi is called “where the clouds gather”, officially labelled and known internationally as Table Mountain. One Table Two Elephants [by Jacob von Heland and Ernstson, CPH:DOX, 84 minutes] is not a “normal” documentary but a film as (ethnographic) research [1]. It is a playful and heterodox portrait of Cape Town that undoes documentarian logic and anthropological gazing, showing, on the one hand, the ongoing legacies of Apartheid – poverty, segregation, epistemic erasure, colonial mindsets. On the other hand, practices of decolonization of mind and body too are showcased; in the midst of colonial legacies and erasure, the film partakes in – rather than documents – creative acts of memory.

This cinematic ethnography contrasts the work of nature conservationists with the artistic and community work of various educators and dancers. The conservationists try to protect the indigenous flora and fauna of “Table Mountain” against “alien intruders”, understanding “nature” as separate from culture and history, with humans’ role to preserve or recreate its original state. This is set against the artistic and community work of a Khoi educator/historian who is learning the Khoi language [2] and hip hop artists who fuse hip hop and indigenous dance styles in order to decolonize body and mind.

One Table: The Power of Naming

It’s sad that landowners allow their lands to get invaded like this. (Said in the film by Pat Holmes, biologist)

“Table Mountain”, the name given by the Portuguese in 1503, continues to cover over other names, stories, and histories that are embedded in the rocks. After violent histories of displacement and erosion of land, the indigenous flora and fauna of the “Table Mountain” park are in danger. The conservationists take upon themselves the mission of protecting Nature as it was (in an imagined original state free from human – or naturalcultural – histories), and therefore how it ought to be, thereby positing themselves as the knowing guardians. Hiring a labor force to do the weeding so that the previous biodiversity can be restored, we see uncanny images that evoke legacies of Apartheid’s racialized division of labour; using modern mapping technologies, the recovery of an alleged original Nature only exists as a thoroughly mediated process of spatial design from a “view from above”, as a totalizing form of modern/colonial design based on rational control.

Nature must be protected from the alleged ignorance of people who do not understand its alleged intrinsic value (as opposed to Nature as a bourgeois value that erases history, obscures power, and posits the white bourgeoisie as a benign force) and from the “alien” fauna that replace the indigenous plants. The language of nature conservation echoes back colonial divides between knowledge and ignorance, with impoverished locals being reframed as the problem and in need of education rather than being on the losing side of violent histories. The work of conservationists employs the same techniques of mastery over Nature in order to preserve it, continuing old politics of naming, mapping, and representing.

The story is captured in the mountain itself, it is a map. (Said in the film by Bradley van Sitters, historian and educator, Cape Town)

But, of course, as Bradley van Sitters, a Khoi and San historian and educator, tells us, the mountain has other names – names that are much older than the recent arrival of Europeans. One other name, “where the clouds gather”, is embedded in stories and histories that highlight the relationality between Khoi and the mountain, between cultures and natures.

Although the film follows different educators and projects, I would like to focus on one particular scene where van Sitters relates his attempt to learn the Khoi language as an example of a decolonial dialectic. “I may not learn it [the Khoi language] perfectly, but I learn it anyways!”, he shares. The first thing he learned from his teacher was a song: tchokochoko tiski, oski sarami, which he translates as “oh mama, how I miss you, how I long to see your face…”

The song is a lament and lullaby that was created by children who were separated from their parents in different train compartments, van Sitters continues. The separation of the generations was part of the colonial division of labour, with children and parents being put to different types of work. The song follows the rhythm of the locomotive on the tracks (tchokochoko tiski…). It is the sound that the children would listen to, since it was the only thing that still connected them to their parents.

The rhythm of the train becomes the rhythm of the song: the locomotive can be read as the ultimate expression of the project of modernity/coloniality, as a conquest of time and space based on a racist dichotomy of humanity and history on the one hand and indigenous people and nature on the other, imposing a particular temporality/temporalization and space/spatialization that breaks different relational understandings of time, space, history and nature.

This temporal-spatial imposition is part of the colonial-capitalist division of labor that disciplines bodies in the name of a single history of civilization. But this project of modernity/coloniality can never achieve its closure: the locomotive breaks the time of the Other, but the Other’s time, space and story becomes reconfigured in the very rhythm that undermines it. The rhythm of the locomotive becomes the rhythm of a memory, a song that holds an impossible memory and carries the promise of a future different from the envisioned end-station.

From the colonial severance of relationality, a new poetics of relation emerges. This is beautifully expressed in the project to fuse indigenous dance and hip hop by the educators and dancers of Emile Jansen, Leeroy Philips and Stefan Benting from Heal the Hood and Mixed Mense, and the educational work for children to decolonize mind and body through movement. Van Sitters and the other educators and artists in the film, as well as the filmmakers, participate in cultivating plural worlds and the promise of different futures through creative memory-work. Unlike the conservationists, the film does not aim to “conserve” anything. Rather than a search for the lost object, the film partakes in creative acts of memory: amidst colonial legacies and erasure, traces of indigenous cultures are re-enacted and re-created, partaking in the plural worlding undoing the colonial logic of the One.

In concluding, I would like to discuss the film in the context of the DemPrac2019 seminar [3] and suggest that it is an example of what during the seminar was called film as decolonial dialectic. The seminar – centered around Marxist and decolonial ecological perspectives on the relation between nature and capital – explored the possibilities of film. Can film, despite its material and financial embeddedness in a profit-oriented market of circulating images and information, create a rupture or “in-between” space? Can film, as a collaborative endeavor, harbor and cultivate other knowledges, practices, memories, futures, and temporalities that interrupt the capitalist flow of production and consumption?

This is not a dialectic as Sartre saw it. His description of Negritude takes racism and its resistance as a particular moment of the dialectic to be sublated, subjugating it to the truly “universal” struggle of the proletariat. The one-two of One Table Two Elephants does not follow the dialectics of a single totality (thesis-antithesis-synthesis). It is a decolonial dialectic, which refigures the totality as open-ended with plural non-Western historical- cultural-political resources and a project of creating multiple unpredictable futures.[4]

This decolonial dialectic, through collective effort and creativity, pries open the logic of the One (One Nature, One History) and shows the differences and plurality that are simultaneously inside and outside of the movement of hegemonic history – insisting, persisting, existing through and against it. These differences are a constitutive part of the making of this hegemonic uni-versal history but are never fully exhausted by it (the pluriverse that carries and is simultaneously negated by the universe).[5]

These creative acts do not conserve or preserve pasts erased and covered over by official state history. These acts enact the erased pasts in new hybrid forms, making memory- work not a melancholic search for a lost object of the past but a category of the future, of futuring. Difference persists, exists and insists in the cracks of the single story of Nature/History, both enabling it and harboring the possibility of different futures. 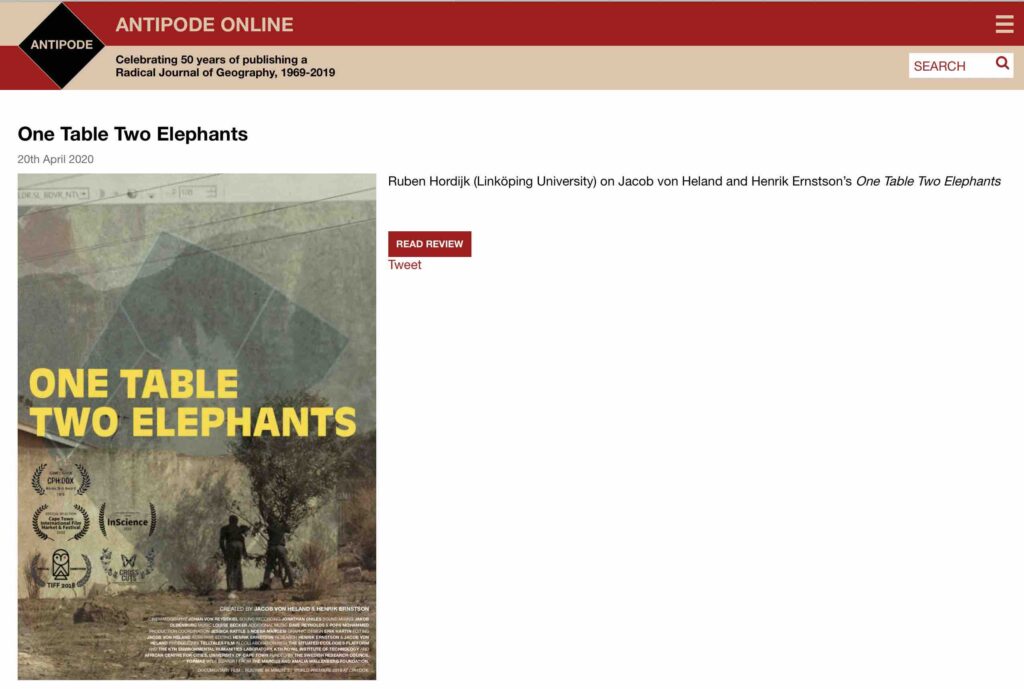 [1] For more on the film’s background, audience, screening and festivals, accolades, credits and a free streaming version, see About the film at Situated Ecologies.
[2] A non-Bantu indigenous group and language of southwestern Africa.
[3] See course website at DemPrac at Situated Ecologies here.
[4] Akin to Ciccariello-Maher’s concept of ana-dialectics in Decolonizing Dialectics (Duke University Press, 2017).
[5] It should be said that my interpretation of the decolonial dialectic might force too narrow a frame onto a work that remains much more open and less “preachy”: it does not put forward any straightforward argument or narrative but shows complexities and layers that can continue to be unpacked from different angles and with different emphases. Importantly, these reflections come from someone who has not been to Cape Town. This theoretical framing would undoubtedly have a different tonality and would be more sensitive to many other important dynamics and layers of the film.
Kinoclub LINDEKA’S BOOK at Streams Conference
Against ‘participation’: A reflection by Matthew Varco on the film “Killing Aliens Everyday” (Von Heland & Ernstson)
Comments