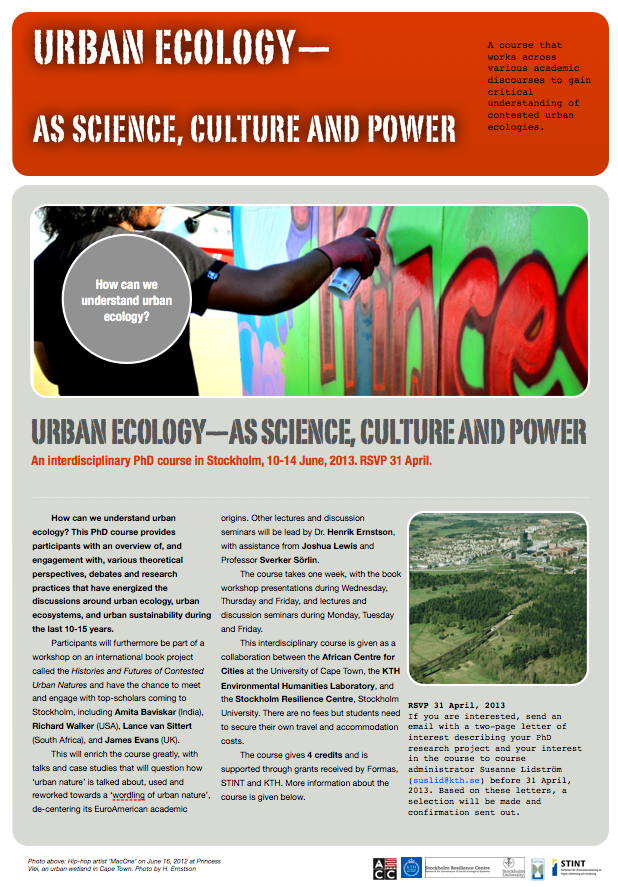 Urban Ecology as Science, Culture and Power is an intense interdisciplinary reading and discussion seminar that covers the wide range of academic discourses that have emerged during the last 15-20 years around urban ecology, urban nature and urban environment. The course has been held at the KTH Environmental Humanities Laboratory in Stockholm in June 2013, and before that as a seminar at the Stockholm Resilience Centre in 2012. No date is currently set for the next course. For more information see below and for the literature list, see here.

How can we understand urban ecology? This PhD course provides participants with an overview of, and engagement with, various theoretical perspectives, debates and research practices that have energized the discussions around urban ecology, urban ecosystems, and urban sustainability during the last 10-15 years.  At the intersection of increasing urbanization and ecological crises, there has been an intense theoretical debate on how to understand and research urban nature and urban ecology. As a way to gain oversight of the latest 10-15 years of academic production, this course provides four fields of value to discuss, namely (i) urban ecological and urban social-ecological systems research, (ii) cultural geography, (iii) urban environmental history, and (iv) urban political ecology.

Although sub-divisions within these fields can be done, they all share an interest in understanding the long-standing question of how humans modify, and are in turn modified as part of biophysical environments, but with different emphasis and traditions of thought. They also, in various ways, places a central emphasis on urbanization and the city as a conceptual and empirical starting point towards broader discussions within natural and social science, and the humanities.

To describe the main features of the production of research across these fields means to work through a continuous shift of how to understand what urban ecology is, and how one can gain knowledge about urban ecology and urban nature. When put together in a course like this, these ontological and epistemological shifts, through supporting and contesting each other, opens interpretative possibilities—a prism for viewing urban ecology as science, culture and power. Included in these discussions hovers the question of what role ‘urban nature’—as cultural symbol and biophysical reality—plays in wider circuits of power and governing logics.

In this PhD course we will carefully work through these fields to familiarize participants with each respective field’s overarching structure of thought and practice. Through lectures and seminars, complemented with paper presentations at the book workshop, this will allow us to discuss, and explore how these fields overlap and contest each other towards enriching our understanding of urban ecology as material condition, academic discourse, and political tool.

The course thus aims to provide participants with a familiarity of an extensive and varied literature.  But also intellectual capacity to critically unpack the politics of urban ecology, and the abilities and disabilities to create more democratic and sustainable forms of urbanization.

Key questions pursued through the lectures, discussions and workshop presentations are:

The course can therefore be taken by PhD students from social science, natural science and the humanities to enrich their PhD projects in different ways.

Obligations for the students

(no grades, only approved/not approved)

The course engages four broad fields in the literature

Urban ecology as a scientific field emerged as a comprehensive field of study in earnest only through the large research grants in the USA in the 1990‘s. The so called Long-Term Ecological Research projects (LTER) in the cities of Baltimore, Phoenix and Seattle firmly established ‘cities as ecosystems’ through teams lead by researchers trained in the ecological and biological sciences; Steward Pickett, Nancy Grimm and Marina Alberti respectively. This perspective has been enriched by studies by urban ecology groups elsewhere, not least those at Stockholm Resilience Centre. Although a core interest has been in ‘green areas’, urban forests and wetlands, which have traditionally been seen as objects of study in ecological research, these groups have also framed the whole city as a biophysical system, including houses, motorways and green spaces as active parts. This perspective is based on complex adaptive systems theory (a la Santa Fe), resilience theory, and is presented as a scientific approach to understand and intervene in urban nature and urban ecology using ecological sciences. It has grown fond to express the value of nature through the ecosystem services framework. Some social science has been integrated, but less so when it comes to social theory and the humanities, including historical research. More nuanced discussions of power, identity, contestation and cultural interpretation has difficulties to fit within its ecosystem model and ‘the social’ tend to enter as ‘boxes’ or ‘factors’, with ‘feedbacks’ to ecological boxes and factors.

Cultural geographic renderings of urban nature have taken an interest in how cultural identities are co-constructed with engagements with urban spaces. Urban nature is viewed as relationally and socially constructed through different networks of power and identity (following for instance Massey), and a more recent move to explicitly draw upon post-structuralist theory to trace and describe such relational processes. Through the latter, the materiality of the city, its ‘urban nature’ is viewed as relationally constructed through socio-material networks whereby also the physicality of objects and things are given agency in understanding the way nature is engaged, modified, and acts back on ‘social projects’ (Murdoch, 2006). Different actors, from planners to residential user groups, use different practices that engage urban spaces and natures, and each create their meaning of space which can overlap, contest each other, or collaborate to stabilize meaning and identities, and processes of inclusion and exclusion. Increasingly, cultural geographers have made use of actor-network theory (ANT)(Hinchliffe et al., 2005; Hinchliffe and Whatmore, 2006; Murdoch, 2006) and assemblage thinking (McFarlane, 2011) to describe these processes. Nature is here used, and thus modified, to express, construct and sustain cultural identities, and social projects. Parks, nature reserves, city squares, buildings and motorways can be part of such analysis and a system perspective is not needed—but networks and relations are key metaphors (especially in poststructuralist accounts), and it works with a ‘flat ontology’, avoiding a dependence on ‘grand theory’ like resilience theory or Marxist theory.

An historical understanding of urban nature has been developed by environmental historians—e.g. Cronon (1991) on Chicago, and Gandy (2002, 2006) on New York and Lagos—and further by more theory-driven urban political ecologists, see for instance Swyngedouw (1997, 2004) on Guyaquil, Kaika (2005) on Athens and other case studies in the edited volume In the Nature of Cities (Heynen, Kaika and Swyngedouw 2006). Through environmental historians ‘the city’ is viewed as constructed by sociocultural and often capitalist processes of accumulation that produces ‘second nature’. This involves the formation of elites and labour classes and the (administrative and material) technologies through which ‘first nature’ (in the country) can be commodified and brought into the markets and be used to construct ‘second nature’ as in cars, trains, computers, and thus ‘the city’ itself. The “concrete and clay” of New York is part of urban nature, and the processes and social relations that made the movement of gravel and water to produce this ‘second nature’ is used as entry point to uncover how cities are made through social relations in an historical process. This describes the dialectical relationship between ‘the country and the city‘ and Marx’ notion of the labour process is key for un-packing this process of urbanization (see Bellamy-Foster, Harvey, Raymond Williams). The accessing of resources from afar, constructs a different nature in the city, a second nature, being the buildings, motorways, and parks, but also the things moving around in and between cities, cars, trains, boats, bicycles, which makes modern life possible, while supporting the circulation of capital. The city comes to us as dialectically related to ‘second nature’, or cyborgs—often seen as created through the imaginaries of the elite or the wealthy with greater social power (Swyngedouw, 1997, 2005; Kaika and Swynedouw, 2000). In supporting the broader process of capital accumulation, the city is (merely) an artifact to sustain this process, while being constructed and modified through the same process, in a dialectical relationship.
Examples from the literature is:
Grimm, N. B., Faeth, S. H., et al., (2008) Global Change and the Ecology of Cities, Science 319:756-760. [5 pages; ]
* This article gives a broad overview of the gathered understanding of “cities as ecosystems”, based on results from biophysical scientific methods published in scientific journals in ecology and the environmental sciences, including Ecosystems, Nature, Bioscience, Landscape Ecology and Ambio. *
Evans, J. P. (2011) Resilience, ecology and adaptation in the experimental city. Transactions of the Institute of British Geographers. 36(2):223–237. [11 pages]
* This piece by a cultural geographer provides reflection on the practice of “urban ecology as science”. The focus is on Baltimore and Phoenix, and their urban ecology research groups. What happens when theories of sustainability and resilience include the researchers themselves? From an experienced cultural geographer, we are invited to critically reflect on how environmental knowledge is produced through the lens of social-ecological systems theory, and how science as practice is also political. A core question is how “the city is being negotiated as both the site and object of a nascent mode of experimental governance.”*
Hinchliffe, S., & Whatmore, S. (2006) Living cities: Towards a politics of conviviality. Science as Culture, 15(2), 123–138. [15 pages]
* This piece by two british cultural geographers starts with where ‘urban ecology as science’ has taken us—urban ecologies are weird, “recombinant”, even bastards, since they differ from the ‘wild ecologies’ studied in the past. This has called into question the scientific norm of delivering ‘facts’, and shifted “the status and location of expertise”. Through visiting local associations and their places, the authors record how also non-humans like animals and plants are part of the city. This leads to a formulation of a politics of togetherness. As perhaps a quite tough introduction to actor-network theory (ANT; a more-than-human theory of action), it pays of to read it carefully… — and discuss it with others. *
Swyngedouw, E., Heynen, N. C., (2003) Urban political ecology, justice and the politics of scale, Antipode 35:898-998. [18 pages]
* This paper describes a key-version of Urban Political Ecology, that rooted in critical theory and Marxism. This is a relational and historical approach that helps to untangle the interconnected economic, political, social and ecological processes that create deeply unjust urban landscapes. The materiality of the urban environment—its different ecologies and often unsustainable forms—is viewed as part of larger social projects in which asymmetrical power relations form the city and its environments. It views “both nature and society as fundamentally combined in historical-geographical production processes”. This paper will be complemented with more empirical chapters for the section on ‘Urban ecology as power’ *
Ernstson, H. (2011) Re-translating nature in post-apartheid Cape Town: The material semiotics of people and plants at Bottom Road. In: Heeks, R., (Ed.) Conference on “Understanding Development Through Actor-Network Theory”, London School of Economics, 30 June, London, URL: http://bit.ly/Re-translating_Nature_LSE. [15 pages]
* This case study from Cape Town shows how urban ecology is being re-translated by those that never before could speak into ‘nature’, or claim to be in the know of Capetonian urban nature. The article follows how persons classified as ‘Coloureds’ during apartheid, form alliances with various entities, including plants, to reclaim urban green spaces. As such it shows how collective action is constructed in-and-through things and people, but also how ethnographic research can move us beyond discussions of distribute justice and understand other dimensions of the ‘the political’ that reside in urban ecology. *
Go here for a full literature list.