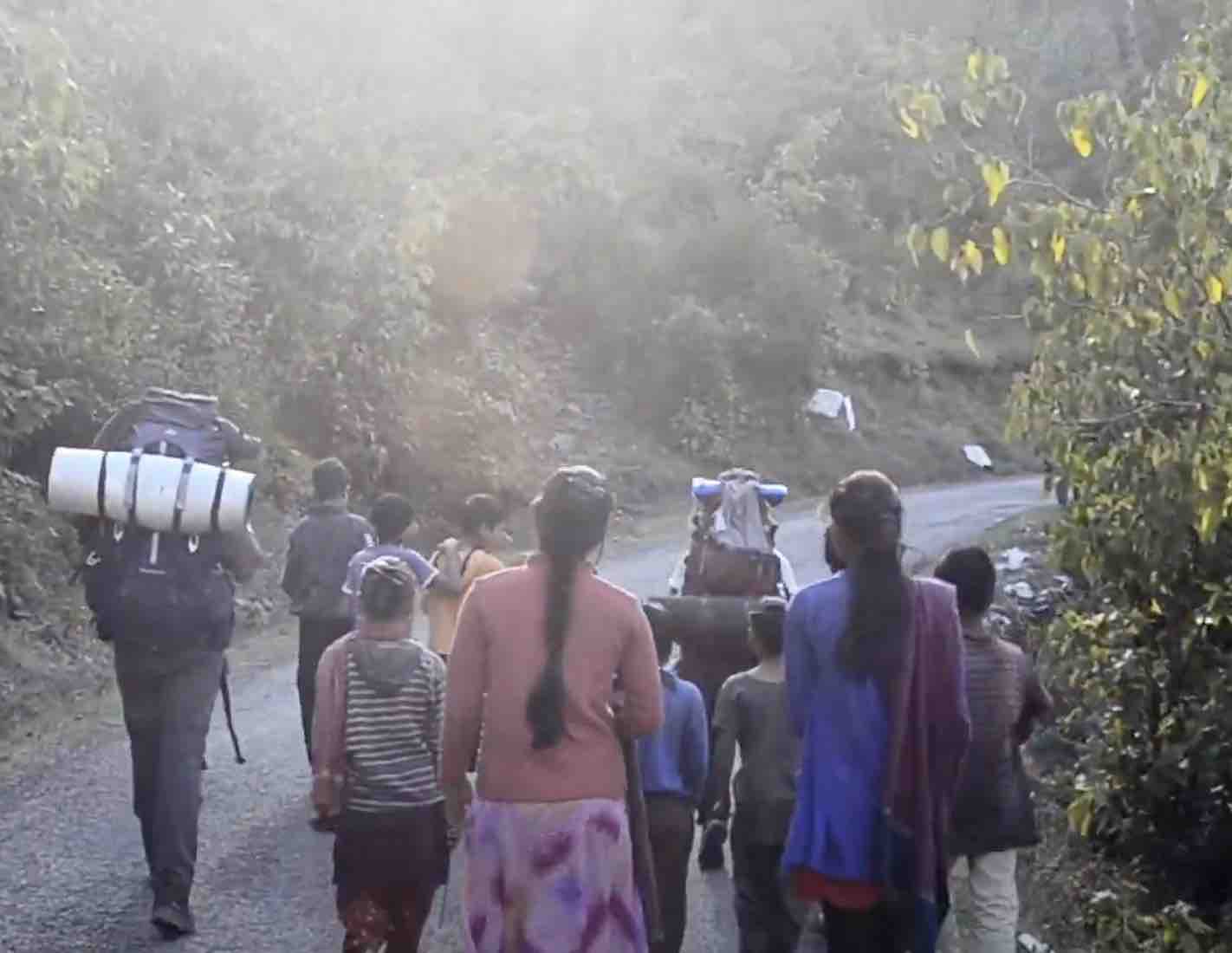 Through a colleague at The University of Manchester, Arianna Tozzi, I made the wonderful acquaintance of Siddharth Agarwal and Ishan Gupta from the Veditum India Foundation. What brought us together was our interest to develop non-textual artefacts to engage and know the environment, environmental research beyond the written word. While Jacob von Heland and I have focused on using film to research urban life in especially South African cities, Arianna Tozzi and her co-workers have built an interactive map and website about everyday river life in India (see blog-post on our sister site Situated UPE).

But, I think Siddharth Agarwal takes the price for the humility by which he develops rich, intriguing, and welcoming artefacts about the environment—by walking, by walking along rivers and recording it in different ways. And when I say walking, I mean walking for very long distances.

In a recent documentary film called Moving Upstream: Ganga (with official trailer) he records together with director and editor Shridhar Sudhir how he walked the entire length of the giant Ganga River, or Ganges, in India, 3000 km long. As he tells us in the official trailer of the film:

My name is Siddharth Agarwal. I’m otherwise trained as an engineer. But for the past few years, I’ve been walking along rivers in India. [00:00:26ff]

The film, which have earned recognition at festivals and news reports but which I have not seen yet, records his meetings with people, landscapes and flowing water, but also explores in a playful yet serious way what the act of walking does to us, how it changes not just what we meet, but how we meet:

Walking has the capacity to disarm someone you’re meeting. And that allows for very fluid, very fluent conversations [and] all the layers of separation that we generally have on meeting someone new…, walking enabled the removal of all those layers. [00:00:44ff]

Siddharth Agarwal has walked more than one river.

Soundscape of a river walk

If Ganga lies in the North of the country, from the coast towards the Himalayas, he has with fellow walker Ishan Gupta also walked the more centrally lying river of Betwa, a tributary to Yamuna. For this walk they created a sound piece, or soundscape called Upstream Along the Betwa. Ishan Gupta sent me the following description of the project:

This sound piece was composed using recordings made during a two-week long 150km walk along the banks of the river Betwa in central India. The recorded composition was made as a performance of mixing different sounds from field recordings made along the way, in the manner of a disc jockey.

The piece can be heard as a docu-fiction in that the source material are field recordings but they have been arranged to form a brief aural immersion of a walking tour. The piece is built around the sound of crunching footsteps, the most ubiquitous sound during the walk, which also sets its rhythm and tempo. Various recorded sounds of the receding city and the larger riverbank area are slowly introduced and removed, as we imagine ourselves walking towards and eventually past temples, railway tracks, birds, people and so on.

There are fragments of conversations which we had along the way, particularly those of local people talking about their relationship with the river (in Hindi) through their individual lenses. Amongst these are fishermen lamenting their decreasing catch in recent years, an elderly man recounting a mythic origin story of the river and a tourist guide at the ancient Udayagiri caves, which the river flows past. And then there is the sound of the river itself, my constant companion and guide. 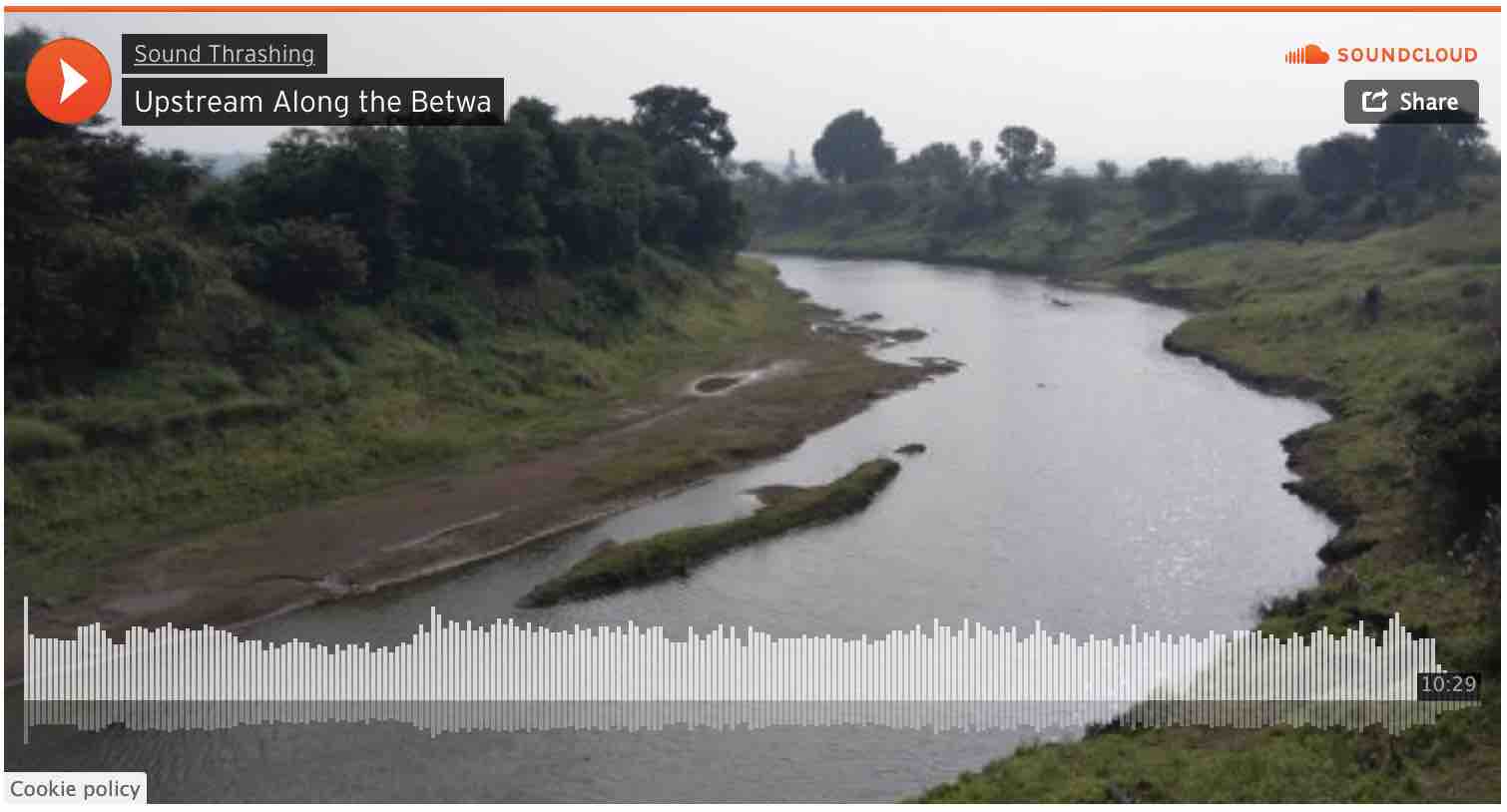 Please find a moment and listen to their sound recording, an “aural experience of the Betwa Riverscape.” There is also a longer written piece at Veditum India Foundation that develops their methods further.

Here at Situated Ecologies we are intrigued and interested in attempts to develop rich, open-ended and welcoming artefacts that not only brings us closer to situated ways of understanding diverse environments, but which also expands and diversifies the methods used for environmental research.

For writing this post, I want to thank Siddharth Agarwal and Ishan Gupta at Veditum India Foundation, a not-for-profit research and media organization that works at the intersection of environment, culture and society. It is based in Kolkata, India. Please also check out their City Water Walks project in Mumbai. I also want to thank Arianna Tozzi for making the connections. (Note: [00:00:29ff] are timestamps [hh:mm:ss] from the official trailer of the film Moving Upstream: Ganga.)