The Bayou Bienvenue Platform in the News

Last thursday, about 60 people gathered on the Bayou Bienvenue Platform overlooking the swamplands along New Orleans’s eastern margin. Situated next to the Lower Ninth Ward neighborhood and the Inner Harbor of the Port of New Orleans, the Bienvenue wetlands have become a focal site for environmentalists, community groups, and various bureaucrats and politicians in illustrating the city’s persistent vulnerability to coastal storm surges, and the role that wetland landscapes might play in mitigating flood risk in the future. While the platform is no stranger to press events, this one in particular demonstrated how a diverse set of environmental groups, neighborhood organizations, and formal environmental agencies are reasonably unified in their belief that the small wooden platform is an important site in the region, or as one national environmental organizer recently put it in an interview: “the most politically powerful location in the Mississippi Delta.”

The area’s flat terrain means that the slightly elevated position of the platform brings a spatial perspective between neighborhood, urban core, coastal ecosystems and water infrastructure. The section of the Lower Ninth Ward immediately adjacent to the platform has some of the lowest rate of population return following Katrina (~20%), and the scars of the storm still appear fresh. 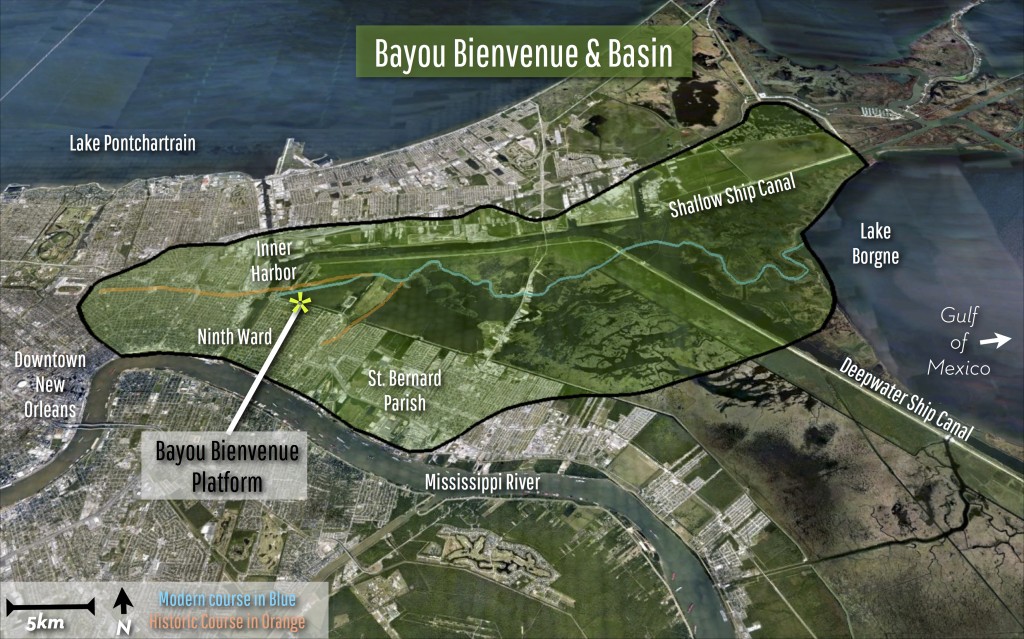 The platform site represents a spatial center in the MOVE-NOLA study area, which consists of the historical drainage basin of Bayou Bienvenue. Our research at the site has spanned around six years, and has included participant observation, basic water sampling, and vegetative inventories. Our primary interest here however, is tracing how the site has evolved as a place where networks of activists, residents, and state agencies have built relationships around a common intention to achieve extensive ecosystem restoration in the once-forested wetlands, and how the ecological history of the region is often narrated and performed by individuals and institutional representatives at the site in the form of guided tours, university-based projects, press events, art installations, and so forth. Constructed on top of a floodwall in defiance of various regulations in 2007, the platform continues to develop in its utility both to people interested in fishing and crabbing close to their homes, but also as a laboratory for restoration ecologists, a educational site for teachers, and a viewpoint from which the otherwise difficult to imagine crisis of land loss in Louisiana can be articulated and narrated for high-profile visitors. Despite the thousands of people who have visited the platform, including officials from the White House and numerous federal agencies, the expensive and energy-intensive restoration of the area has as of yet failed to gain traction in the US Congress, the body that appropriates federal monies to enact such projects, usually through the US Army Corps of Engineers. Recently however, the State of Louisiana has developed a far reaching master plan for coastal restoration, projected to cost nearly $50 billion and take decades to complete. Some of that funding will likely be leveraged through the fines that British Petroleum is paying the US government for the massive 2010 oil disaster in the Gulf of Mexico. While the bayou triangle was dismissed by restoration planners as a viable restoration site after Katrina, the platform and that various actors responsible for its construction and maintenance have managed to generate intensive interest in the wetland triangle, which is now regarded as one of the signature projects in both Louisiana and US federal restoration proposals. The individuals and institutions involved were of course important in this reworking of spatial perspective, but as we argue in a forthcoming article, the materiality of the platform, its spatial position, and the dead cypress trees and nearby neighborhood devastation and rebuilding all contribute to the success of the site for community recreation and state wide coastal restoration policy and practice.

Below is another video of press coverage of Thursday’s event. Note the prominent role of Garret Graves, the state of Louisiana’s head of restoration policy, representatives of the National Wildlife Federation, and also John Taylor, a Lower Ninth Ward resident who has spent much of his life in the swamplands adjacent to the neighborhood.