What do communities do if politician after politician fails to deliver their election promises of new homes, electricity supply or clean water. In 2011 I joined activists in Cape Town who are articulating a new response to the crisis of service delivery in the city. 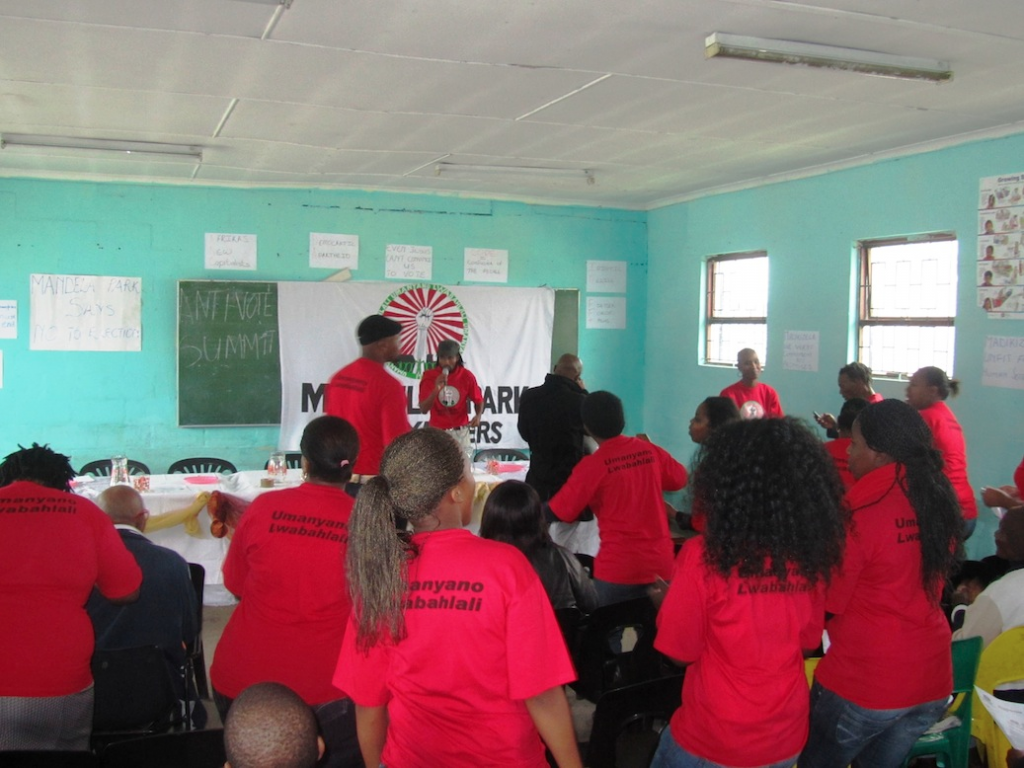 It is early on Saturday morning in Khayelitsha, one of South Africa’s fastest growing townships located on the windswept and sandy Cape Flats area of Cape Town. Amongst the government constructed houses and informal settlements that make up the township the Cape Town of five star hotels and Michelin starred restaurants seems even further away than the 10 mile journey to get to this vibrant part of the city.

With municipal elections less than a week away campaigners from the main political parties, the ANC and the Democratic Alliance (DA), are out in force in their brightly coloured t-shirts handing out leaflets, waving flags and attending rallies in the hotly contested race to control one of South Africa’s largest local authorities. The City of Cape Town is currently under DA control but the margins are slim and Khayelitsha could provide a key battleground for the parties.

Like townships and rural areas across South Africa the main election concern for voters in Khayelitsha is around service delivery issues. The building of new homes to tackle the housing crisis, the connection and supply of water and electricity and a range of related issues have all become paramount concerns for the party’s strategists as voters patience evaporates.  These attempts to engage with voters around service delivery issues show how politics in South Africa is beginning to move away from older racially orientated voting patterns. This election has been described as the service delivery election with the DA presenting its record over the last few years to show how well run the city is compared to its national equivalents and the ANC hitting back with counter promises, accusations and lorry loads of leaflets.

Yet not everyone is caught up in this Saturday morning election fever. At the community hall in Mandela Park activists and community members have come together at the Anti Vote Summit in a riposte to the serial promises of service delivery that the electioneering in other parts of the township is presenting. Many have come to express their dismay at the political system that has failed to address their basic needs since the first democratic vote in 1994. With the housing waiting list in the city of 3.5 million at over 400,000, spiralling electricity costs and rising disconnections and a growing number of evictions the attendee’s feel that the politicians time has run out. Mandela Park Backyarder activist Loyiso Oanya elaborates, “Any disregard of the people’s conditions calls for necessary measures, until the dire and excruciating conditions of the people are properly addressed. As such, this anti-vote call is simply one of them we reiterate, no house, no vote”.

In South Africa where the struggle to vote took many years and many lives this refusal to vote until essential services are delivered is not necessarily a popular position to take. The groups involved in the campaign have taken criticism from many directions seeming to unite bitter election opponents in condemnation. But as another Backyarder activist, Mabhuti Matyida, explains, “As long as we live in these sub-human conditions, we shall find our own way to redemption without the help of any political party. As long as parties are part of the architects of our condition, we will not vote”

During the summit attendee’s hear from community members struggling without electricity, others in debt to banks and facing eviction and some whose homes have been demolished. The common theme seems to be a loss of faith in any party to deliver basic services and the need for people to make a statement at the election. Xola Skosana, an outspoken pastor who has received international attention after his ‘Jesus has HIV’ sermon was also at the summit and agreed with the sentiment of the activists and community members, “A vote is a vote of confidence, a no vote is a vote of no confidence in the political system”. In a few weeks the Mandela Park Backyarders will begin a new brick making project that will provide employment and cheap building materials for the area and show that politicians risk becoming nothing more than a side show for people forced to build their own futures.

Later in the afternoon in Gugulethu, another township near Khayelitsha, a gathering is hosted by political artists Gugulective and underground hip hop performers Soundz of the South. This event, including performances, debate and the launch of the book No Land! No House! No Vote: Voices from Symphony Way, further illustrates the rising tide of anger and action against both the DA led municipal government and the ANC led national government. Whilst the No Vote campaign retains a low profile amongst many voters in the city it nevertheless reflects a growing frustration at the promises of the post apartheid democratic era and the likelihood of a low voter turnout for the municipal elections in Cape Town and across South Africa.

Thanks to the Mandela Park Backyarders for the invite on Saturday.

You can find out more about them here

Cityscapes: An urban magazine from the global South
Staging difference at Princess Vlei. “You can bet they struck a deal at the vlei” (Part 1)
Comments