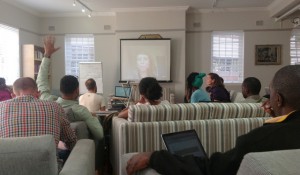 As cities become increasingly significant to development and environmental crises at multiple scales, there is a growing need for research that can contribute to both theory and practice. The term “urban political ecology” (UPE) describes a critical approach to studying cities across a number of themes, ranging from more traditional environmental issues (such as climate change, air pollution, and nature conservation) to urban flows (such as sanitation and electricity provision). Many scholars believe that there is a need for a more explicitly political approach to these topics that draws attention to who wins and who loses as cities change, as well as to how urbanization as a process is shaped by power relations. These ideas informed the Urban Political Ecology in African Cities Workshop, held at the University of Pretoria in South Africa from 22 to 26 September 2014. Organized by researchers affiliated to the Situated Ecologies collective (SUPE)[1], the workshop drew in early-career researchers to discuss critical approaches to urban environmental research, drawing on recent conversations in the literature about theory and methodology. A major concern was to discuss how the scholars and cities of Africa and the global South could more fruitfully participate in wider theoretical discussions. It aimed to support new ideas, research collaborations and grant applications and provide an opportunity for discussion and in-depth engagement around these issues. The idea was to assist young researchers through targeted discussions on establishing research partnerships, funding applications and academic publication.

You can find a longer report, written by James Duminy on the Antipode Website.

We would like to express our sincere gratitude and thanks to the journal for funding the workshop.