Tomorrow is the start of the DOPE conference on Dimensions of Political Ecology in Lexington, KY. SUPE is organizing a special session with 8 papers from across the world (unfortunately Cameron Hu and Ilia Farhani had to cancel their participation). The session is on “Pluralizing Urban Political Ecology in a World of Cities” and gathers in-depth case studies with theoretical conversations, from Jakarta, Bangalore to New York City. This is the start of our year-long SUPE conversation on doing and studying urban political ecology in a world of cities. (DOPE conference programme, here.)

As we have reported, the session will mix students and more experienced scholars, theoretical reflection and case studies. Garth MYERS pushes us to seek spatial justice in African cities and with Missaka HETTIARACHCHI we travel to urban wetlands in Kolkatta and Colombo, unpacking the political content of their governing. Lindsay CAMPBELL discusses trees and ‘green spaces’ in New York City, Malini RANGANATHAN learns from Bangalore on how to pluralize the state in urban political ecological analysis. Alec FOSTER unpacks Philadelphian urban ecologies through the notion of ‘doing identity’, and Mary LAWHON analyses media representations of environmental struggles in South Africa. Joshua COUSINS will present a broad literature review from 1965-2012 on different theoretical takes on urban metabolism. Henrik ERNSTSON opens the session by provincializing Urban Political Ecology through African Urbanism. Our two-part session will be moderated by Henrik ERNSTSON and Mary LAWHON. Stay tuned! Our 2014 SUPE Platform Conversation has just begun. 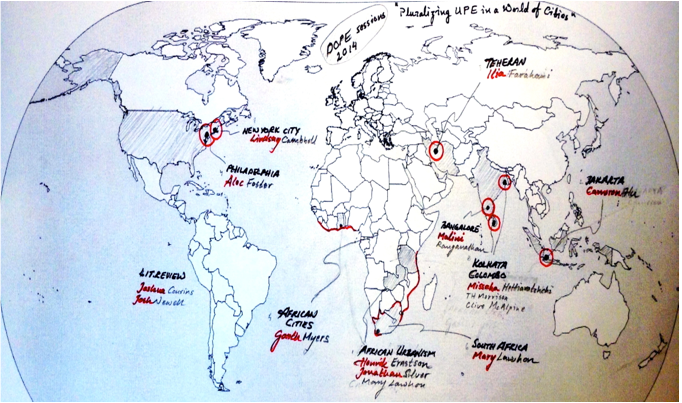