Marnie Graham successfully defended her PhD thesis at Stockholm University on “Postcolonial Nature Conservation and Collaboration” on the 27th of February 2015. Her study is part of our “Ways Of Knowing Urban Ecologies” project in Cape Town where she has studied nature conservation and collaborative arrangements at the Macassar Dunes.

By framing the site and nature conservation practices as embedded in colonial and apartheid legacies Dr. Marnie Graham uncovers how such legacies both continue into the present, but also when they are negotiated and transformed when people from different backgrounds meet. Her study includes analysis of how nature conservators are elaborating new identities and methods in becoming nature conservators in a post-apartheid and post-colonial urban setting like Cape Town. Based on empirical work in Cape Town, her thesis develops a more general approach on how to handle and understand the intersection between conservation and urbanization, in particular in cities of the Global South.

The Swedish research council Formas is acknowledged for providing funding for this thesis research through the research grant “Ways of Knowing Urban Ecologies” (Dnr: 250-2010-1372; WOK-UE) lead by Dr. Henrik Ernstson. Her supervisors have been political ecologist Dr. Henrik Ernstson at KTH and human geographer Sandie Suchet-Pearson at Macquarie University in Sydney. 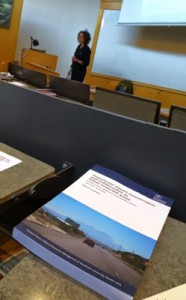 Summary of the thesis:

Nature conservation has a lengthy, contested history throughout much of the colonial/settler world. In South Africa during the colonial and (defacto colonial) apartheid eras, conservation was marked by exclusion and dispossession of colonised peoples, and state and elite control of land, resources and knowledge. These inequitable processes were underlined by normalised and racialised ideas and relations to nature, conservation, knowledge and protected areas. In the post-colonial, post-apartheid era, theories and practices of inclusive, devolved, and people-centred approaches have emerged around protected area management, referred to collectively as co-management.

The empirical focus is on Macassar Dunes/Wolfgat nature reserves in Cape Town, South Africa, where municipal conservation authorities collaborate on conservation initiatives with community representatives who come from expansive adjacent informal settlements and racially-segregated apartheid-era townships. Through semi-structured interviews and participant observation, I draw on the perspectives from diverse participants in these collaborations to interrogate the (post)colonial condition of collaborative urban nature conservation at Macassar Dunes/Wolfgat, while striving to expand my analysis more generally to be speak into the growing literature on Southern cities (Robinson 2011; Parnell and Pieterse 2014).

Through this analysis emerges complex, ambiguous and contested relations to urban nature, urban space, conservation, knowledges, participation, stakeholder identities, and collaboration. On one hand, neo-colonial practices of exclusion and control are embedded in policy and management regimes, in spite efforts of collaboration and participation. This manifests in conservation science, knowledge production, environmental education, tourism initiatives, and in ‘stakeholder’ identity constructions. On the other hand, my research also demonstrates how those involved in collaborations, from civic representatives to conservation managers, challenge colonial conservation notions and practices, and that these spaces of collaboration can re-work and contest neo- colonial notions and practices.

In my analysis of how nature conservation is re-worked and challenged at Macassar Dunes, I pay attention to the institutional and contextual constraints of the collaborations. The focus is however also on interpersonal relations amongst people and between people and nature that occur in-place at the conservation area, and in the adjoining spaces of the townships and informal settlements. Attention is paid to the often ad hoc, informal and deeply inter-personal relations that develop through the collaborations, and which are challenging conservation practice in profound ways. The relations formed in and through collaboration are informing from the ‘bottom-up’ what post-colonial nature conservation practice could be, but also how colonial legacies and tendencies ‘slip’ into these interpersonal relations.

By necessity, this analysis requires engaging difficult questions of race, identity, informality, poverty, insecurity and diverse ways of knowing urban nature through the collaborations. It is these themes that permeate the analysis and bring novel insights into the practice of urban protected area co-management as an endeavour of post-colonial nature conservation. The thesis is composed of an Introduction, Literature Review, Methodologies and Conclusion chapters, together with four manuscripts prepared for publication in peer-reviewed journals.

The Swedish research council Formas is acknowledged for providing funding for this thesis research through the research grant “Ways of Knowing Urban Ecologies” (Dnr: 250-2010-1372; WOK-UE).