You can now listen to Henrik Ernstson’s key note at the Portland State University in the beginning of April 2014. The so called Webinar is posted at the following link (try this link first, or else this link to get it started). The talk starts at 8:14 into the recording, after introductions. 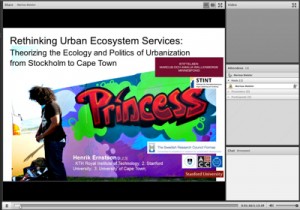 In this key note I was trying to respond to the PSU PhD students and IGERT fellows concern about how ecosystem services and its applications, often end up being used in quite uncritical and non-political ways and as such fails us in helping us to answer and research crucial questions. I had similar worries about ecosystem services when I was doing my PhD studies at the Stockholm Resilience Centre, including concerns about social-ecological systems and resilience theory. It was therefore a great privilege to be speaking to staff and students at PSU about these issues as they are working hard to develop crucial knowledge around sustainable development.

My talk was entitled “Rethinking Urban Ecosystem Services: Theorizing the Ecology and Politics of Urbanization from Stockholm to Cape Town” and it tries to summarise how my own thinking developed since from the latter part of my PhD studies, from say 2006-7 until the publication in 2013 of two of my ‘ecosystem services’ articles. I start the talk by summarising what it will be about:

In conversation with the “organizing crew”, we decided that my task here in this talk is to provideÂ material on how we can think and maybe re-think ecosystem services, based mainly on my own experience and trajectory. My talk will depart from the quite uncritical approach I was part of atÂ Stockholm Resilience Centre from 2003-2008 where we used ecosystem services in relation to metaÂ theories such as resilience theory and social-ecological systems theory (SES). I will then use myÂ own experience on developing a more critical approach to urban ecology, which of course goesÂ much wider than “ecosystem services” although that will remain my focus in this talk.

The talk was followed by great discussions. I am indebted to the PSU-IGERT students, in particular Erin Goodling for leading the “organizing crew” and to realise the full week at PSU in April. Erin will soon post at our SUPE Commentaries, and Anthony Levanda from PSU  has already done so. There is great vibrant community of critical scholars and students at PSU!