Cityscapes: An urban magazine from the global South

How to think cities anew? When what we are seeing are not new Londons, Parises, New-Yorks or even Tokyos growing, we need to start re-thinking what urbanization and urbanism is about. 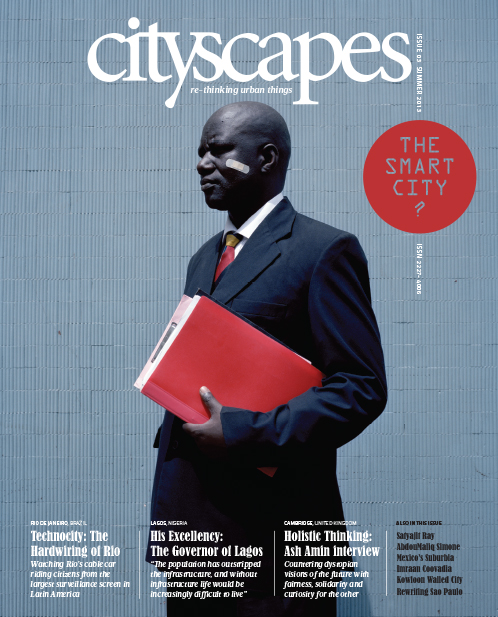 This is when we need a magazine like CityScapes. Started in 2011 by artist-desginer-urbanist Tau Tavengwa and Sean O’Toole, backed up by southern urbanist stalwart Edgar Pieterese, the magazine gives a provocative shot or sip of a matured postcolonial critique of knowledge production.

Indeed when urban Theory, capital T, is not longer valid for the type of cities we see in Rio de Janeiro, Lagos, Johannesburg, Mumbai, and Jakarta, we need new tools, registers and ways of engaging that allows for new theories of the urban to grow and influence city-making, including planning and design professions. This is when we need to ask, like Indian historian Dipesh Chakrabarty of how to “provincialize Europe”—re-inserting the ‘localness’ of European thought to allow for experiences of urbanization and scholarship from different regions to take hold and influence theory-making. If Europe and USA is merely a province in the world of knowledge-making, then how have other regions thought and enacted their cities?

The CityScapes magazine makes the amazing balancing act of being popular and punchy, while delivering a relentless critique that cities should not only be thought about from a EuroAmerican experience. But from locations like Lima, Nairobi, Mogadishu, Bangalore, Jakarta, Harare, and Medellín. This builds upon decades of academic critique of how theory—or established ways of thinking—has been critiqued.

Indian urban scholar Ananya Roy (2009) and South African cultural geographer and comparative urbanist Jennifer Robinson (2002, 2005 etc.) have in a series of articles argued for a comparative urbanism, a cosmopolitan urbanism that can de-centre EuroAmerican theory and experience.

In response to the ‘world city’ theory created by Saskia Sassen and in part Manuell Castells—which traces the economic relations for global capitalism and has come to create hierarchies of cities based upon the number of transnational companies that chooses to place their offices there—Robinson argues for theories of the ‘ordinary city’.

This is not to say that the world city theory is not helpful to understand the internationalization of capitalism, and how it necessarily needs cities, but to say that its focus comes with effects. 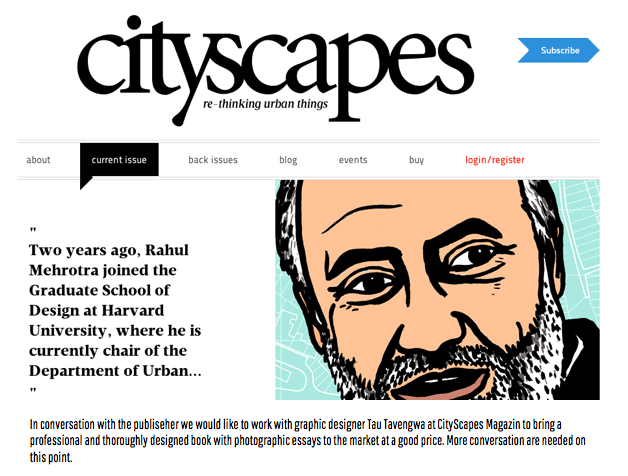 These ‘ordinary cities’ does not only ‘fall off the map’ of the ‘world city theory’, making these cities uninterested locations for research and policy, but these cities also suffer in the way that investment—private and above all public—are spent increasingly in cities that aspire to become ‘world class cities’.

Consequently, backed by the world city theory, a whole industry of consultants and thinkers have carved out a policy field to influence how decision-makers can turn their own cities into ‘world cities’. This shapes the urban agenda away from the problems and possibilities of the ‘ordinary city’ and in particular the needs of the urban poor.

In Cityscapes last issue #2 the world city theory is under scrutiny. Through interviews and photography, the magazine unpacks infrastructural investment in Johannesburg, and also visits Bangalore. Increasingly many Indian cities are aspiring to become world-class. “As an instance of homegrown neoliberalism, the Indian world-class city is inevitably a normative project”, writes Ananya Roy in Worldling Cities edited book (2011). As reported, “Why? And for whose benefit is the world-class city?”.

In the current issue #3 focus is on ‘The Smart City’, the increasing tendency to invest in high-tech monitoring and surveillance techniques to govern city-life. This represents a move to allow technicians and experts not only a greater say in defining the problems of the city, and its solutions, but also in the actual day-to-day governing of the city. As expressed by the editors in promoting this issue:

“We increasingly share the space and time of cities with semi-autonomous agents of a nonhuman, indeed non-biological, nature, from drones to algorithms,” offers Adam Greenfield in his provocative 100-point manifesto appearing in Cityscapes and addressing the pervasive use of tech-savvy urban management solutions. Noted urban theorist Ash Amin, in a cornerstone 5000-word interview with Matthew Gandy, is also wary of the ideological implications of reducing city management to the top-down marshalling of abstract data.

If you are intrigued and need a stylish, punchy, provocative shot of postcolonial critique, make sure to get a copy of the new Cityscapes #3. It will hopefully come to destabilize how you think about cities. You can find more information here.