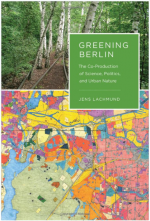 Henrik Ernstson just published a review of the book Greening Berlin by Jens Lachmund in the journal Science and  Technology Studies (full review here).The book which is published by MIT Press deals about the rise of urban biodiversity protection and how urban ecological science was shaped by the place of Berlin. It starts of in post-war Berlin and traces how ecologists translate ecological field work into a political tool for urban planning.

The two main characters of the book is urban ecologist Herbert Sukopp and Berlin itself and how they came to influence the organization of urban ecological science. From c.1960-1990, we get to follow how a small research group tries to put into action their grand vision of “urban renewal under the guidance of ecology” (p. 231). I write in my review:

The major theoretical contribution of this book lies in the textured understanding we receive on how the practice of field science is necessarily caught between a (hard) place and universalism, a theme discussed by others (Evans, 2011) but not at this length.

In the version I sent in to the journal I had used a title that got edited away since the journal use a predefined way to title their book reviews. My original title contained the phrase that Greening Berlin “is a much-needed account on the value (and hubris) of ecologists”. Indeed, ecologists have, as Lachmund notes, striven since the 1970s at least to link their expertise to social and environmental problems, a trend that has only grown stronger in the last decade to fifteen years.
In their aims to provide solutions however, which has recently been expressed by for instance US ecologists Steward Pickett, Cadenasso and McGrath in their edited volume Resilience in Ecology and Urban Design (2013)—they seem to claim that ecology should follow the Sanitarians in fixing the (modern) city through universal technologies and principles.However, as I note in my review, we have “lacked a longer historical exposition of how urban ecology is caught up in all sorts of politics, value judgments and internal tensions in wanting to be both objective science and and a guide towards (urban) sustainability (for articles see e.g. Evans 2011, Ernstson and Sörlin 2013)”. Through Lachmund’s longer account we learn about the problems a universal mode of scientific practice can run into:

[Sukopp and his team’s] recording of data aimed in the 1970s towards a “comprehensive structuring of the Berlin territory” that would use statistical indicators and maps to represent Berlin as “complex flora, fauna, and living spaces” (p.59). It crucially also established “the city (or the urban ecosystem) as a generic object of ecological knowledge” (p.72), mingling place based field work with universal claims.

Importantly, and of great concern as (urban) ecology flexes its muscles to tackle the city of any city in the world, we learn from Lachmund how universal ideas of science can fracture in the corse of action:

Lachmund pays due diligence on how the ambition to ‘map’ the whole of Berlin based on science (an explicit goal by Sukopp and his group) was fractured as the deadline for their Species Protection Programme approached in 1984. To avoid time-consuming fieldwork, “quick mapping” and a “reduced methodology” (p.105) was eventually used where “biotope types” came to basically equate with “land- use categories”, which did not explicitly or empirically take biological conditions into consideration, but nonetheless “assumed to each represent ecologically homogenous conditions” (p.105) with equal “ecological significance and conservation needs” (p.107).

The theme of place and universalism, links the book to a long tradition on how science and theory-making is caught up in all manners of politics. It links in particular to my article in 2013 with Sverker Sörlin on “Ecosystem Services as Technology of Globalization”, but also to our book project on ‘Grounding Urban Natures’.
I recommend Lachmund’s book to several fields, not least to students of urban ecology.
If you want to read the whole review, go to my Academia.edu page (where you find the last version before proof-editing). Or go to the  journal of Science and Technology Studies. If you want a copy of the published journal, please email me (Henrik).
SUPE Workshop at University of Pretoria
Urban Political Ecology in African Cities Workshop [Pre-notice]
Comments