Organizers with PhD students on the course ‘Urban Ecology as Science, Culture and Power’, 10-14 June 2013 in Stockholm.

Integrated with our book workshop on ‘Grounding Urban Natures’ we also had the great opportunity to run a PhD course on ‘Urban Ecology as Science, Culture and Power‘ from 10-14 June in Stockholm. Organized at the KTH Environmental Humanities Laboratory and with amazing help from Susanna Lidström we could arrange so that the diverse students had the chance to meet and be given lectures by scholars from the book project with different disciplines, apart from our own lectures and literature seminars.

In competition with several other applicants, those selected had written motivation letters that amazed on the range of work that is being done by PhD students in different locations of the world, and different type of work can be related to urban ecology, urban social-ecology, cultural geography, environmental history and urban political ecology. Together they are developing an exciting diversity of PhD projects with case studies ranging from:

– Lakes in Bangalore,
– Export processing zones in Mexico,
– Wetland networks in Stockholm,
– Bats in UK cities,
– Fear of crime in green spaces of Kuala Lumpur,
– Adaptive co-management in South Africa and Australia,
– Small parks in Petaling Jaya in Malaysia,
– Archeology of Great Zimbabwe,
– Children’s use of urban forests in Denmark; and
– Green infrastructure in Milan,
and including more, for instance eco-critical studies of culture and literature.

This range of case studies and their previous readings brought together an amazing course, with sensitivity to various biophysical processes and politics associated with urban ecologies world wide. Truly exciting.

Overview Phd Course
Monday—Focus on the literature and developing tools for critique. Lectures and discussion seminars.
Tuesday—Guest lectures with case studies from USA, India and South Africa. One discussion seminar.
Wednesday—The course will participate in public event of the book workshop in the morning with international speakers and chance to mingle with other invited research groups.
Thursday—Self-study.
Friday—Participate in book workshop. Concluding lecture and discussion of essay, examination, and next steps to keep the group together.

Preparatory task was linked to lectures and concluding essayThe essay that everybody had to write after the course was framed as being the site where students could collect their notes from their reading and where they started to use these notes to reflect on their PhD project. The preparatory task was to prepare for this by collecting notes while reading the material to the course. These notes were things they found really find interesting, or provocative and that could be discussed more in the course. 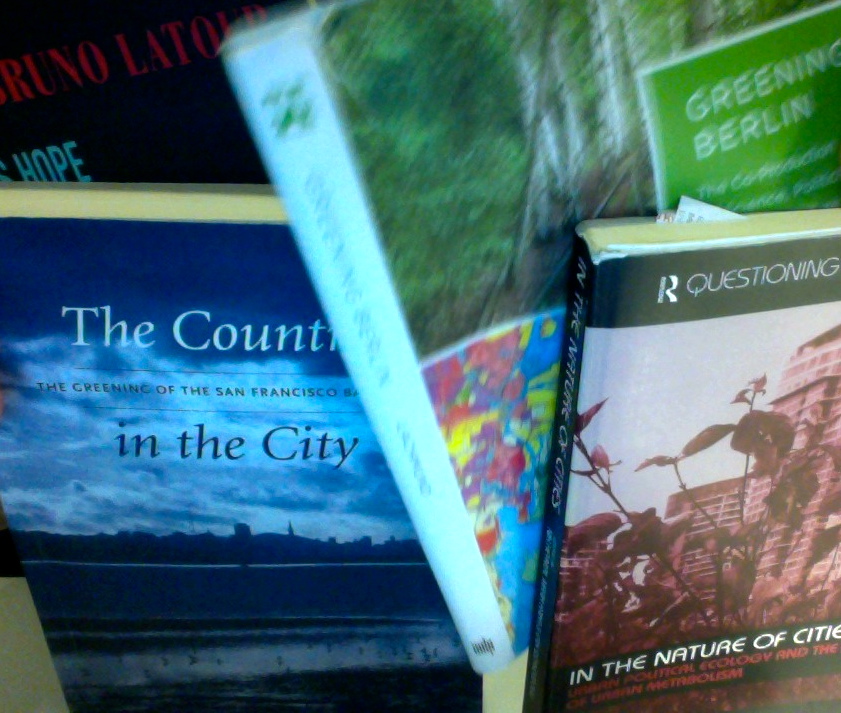 9.00-10:00 Welcome and introduction 5 min introducing yourself. Slides or an artifact to be used as presentation.

Aim: This lecture will aim to give an overview of four different types of literatures that the course engages with. Urban ecology as science with focus on social-ecological systems theory and resilience theory; As culture with focus on cultural geography and more-than-human geography; As history and power with focus on environmental history, and urban political ecology (UPE). Each field’s underlying structure of thought will be outlined. In this short lecture, there is not time to go into any depths, but this will be pursued during the course. The layout of these fields is also up for debate during the course, but this is where the lecturer exposes his first view on the fields and how they critically can start to be set in relation. Tracing of epistemological shifts between discourses.

Aim: These two literature discussions will each focus on 3-5 papers and go close in how they are constructed and how arguments are constructed. What presumptions are used and left unexplained. These papers will function as a focusing device, but our discussions will involve the broader literature that is part of the course. We will here start, based on your reading of the literature, to break the different literatures against each other to unpack and enrich the notion of urban ecology and learn how differently it can be understood and researched.

Abstract: Until the 1990s the idea of ‘urban nature’ was largely confined to studies by a handful of East German ecologists and the coffee table publications of amateur naturalists in the West. Fast forward 25 years and urban ecology is a hot topic, viewed as a key component of the sustainable city. Far from simply a curiosity, urban ecology is now credited with the power to facilitate low carbon transitions and help city dwellers adapt to rising temperatures and increasingly extreme weather events. This lecture explores how we as social scientists can understand and study powerful policy discourses like ‘resilience’ and ‘green infrastructure’ that have emerged to articulate urban ecology. All have a distinctive discursive flavour, mobilising specific sets of assumptions and imaginations about what cities are and how they (should) function. The lecture will show how they can be studied as socially networked knowledges that are produced in specific places, mobilised by specific actors, and embedded in specific cities with varying implications. 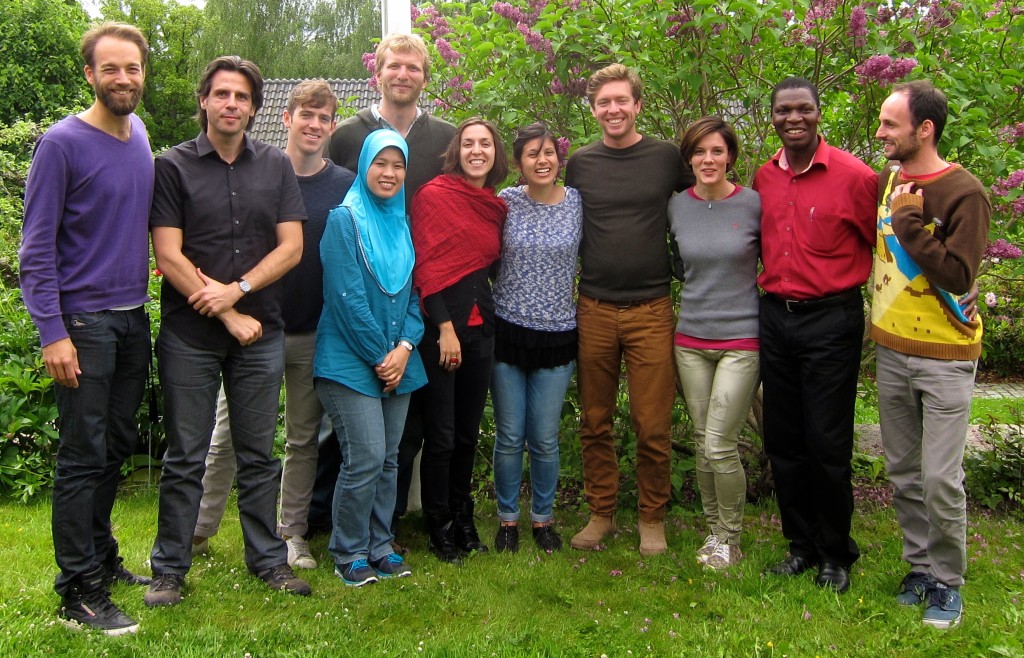 Organizers Dr. Henrik Ernstson (to the far left) and Joshua Lewis (fourth from the right) with PhD students on the course.

Aim: An historical account of the San Francisco Bay Area Environmental Movement, as it passed through several stages with changing concerns, organizations and leaders—all with an enormous cumulative impact on the urban region. A look at how urban nature has been reworked as landscapes, boundaries, agencies and practices, and at the same time as an outlook and a way of life. A wide range of people and organisations, from upper class conservationists to civil rights activists, have fought to improve the urban environment, in typically American grassroots and pluralist fashion, but guided by unifying notions of living with nature, modernist planning and state regulation. At a time when San Francisco rose to be one of capitalism’s absolutely central economic locations, it nurtured a counterflow of opposition to unrestrained growth and profiteering off land, making for many strange bedfellows.

Readings: Introduction and chapters 3-7 in Richard Walker’s (2007) The Country in the City: The Greening of The San Francisco Bay Area, Univ of Washington Press, Seattle and London.  (135 pages to read)

Abstract: This lecture will focus on bourgeois environmentalism or the middle-class pursuit of urban order, hygiene and safety, and ecological conservation, as it operates in Delhi, India. It will be argued that collective action in the ‘public interest’ by citizens concerned about congestion and the collapse of civic infrastructure constitutes a selective public, one that excludes the city’s poorer sections. The analysis also includes how non-humans (in Delhi’s case, cows) interact with humans in influencing such collective action. Central to the talk is how the pursuit of urban order is undermined by the contradictory practices of the very actors who seek to enforce it–the state and bourgeois citizens. Bourgeois environmentalism thus yields outcomes that are not only socially unjust but ecologically dubious.

Abstract: The move towards empirically describing sociomaterial networks—or actor-networks—has gained traction in urban research, including Urban Political Ecology (UPE). This has meant to ‘re-assemble the social’, to view the ‘social’ as consisting of relations between people and things, and for the empirical researcher to trace these relations and how they are made stable (Latour 2005). Law (2009) has argued that this also means to trace a ‘material semiotics’, that actor-networks can be viewed as ‘scaled down’ versions of Foucault’s episteme and discourse, and open towards a grounded analysis of power and knowledge. This paper uses actor-network theory to describe three different ways of knowing and valuing Cape Town’s urban ecology and how this engenders different types of politics. On one hand an ‘expert-based Cartesian’ way of knowing is traced, enacted through rule-based methods of counting the number of different species (as a measure of indigenous biological diversity), which are coded into maps ascribing values to green spaces, and used to allocate state resources. A second way of knowing is based on the effort to build a ‘business case’ for nature using an ecosystem services approach. A third ways is an in-place way of knowing at Princess Vlei where civic-led ecological rehabilitation and popular struggle to protect green space muddles the binary between Nature and Culture. The paper reflects upon where the political is located in these ways of knowing, following how they control how expertise is being distributed in society, who has voice, and who is silenced, in the quest for how urban natures should be organized, protected and produced. The paper also argues that the ethnographic method of actor-network theory provides a sensitive repertoire to research urban political ecologies in and through African cities where the question of how nature, race, culture, and ecology are interrelated has received little attention.

Discussion about all case studies and lectures together in relation to the broader literature.

Hosted by Henrik Ernstson and Sverker Sörlin and organised by KTH and Susanna Lidström. Location—to be announced.

Discussion of the essay assignment with PhD students.